There has been an uptick in the number of cases in the national capital which earlier had plateaued out. In this write up, we analyze whether it is a second wave or not using key indicators like the bed occupancy, TPR, testing breakdown by type of tests used. We will also have a look at the Serological Surveys conducted in the national capital. The data we will be using is from 1st July 2020 to 6th September 2020 sourced from the health bulletins issued by the Govt of N.C.T Delhi.

Daily progress of cases
First we should have a look at the daily progress of cases being reported. It clear that there has been upsurge. But as per the Health Minister Mr. Satyender Jain and Chief Minister Arvind Kejriwal the majority of the cases being reported are from bordering cities of NCR (National Capital Region) i.e Gurugram, Faridabad, Ghaziabad, Bahadurgarh, Sonipat and G.B Nagar (Noida and Greater Noida) due to abysmal health infrastructure. Even this was a point of contention between the them at the starting when Delhi government had passed order to reserve Delhi government funded hospitals which was later overturned by LG Anil Baijal using his powers in DDMA Act.

The number of tests being conducted was not enough if the positivity rate is more than 5% … Even the United States is testing a huge number of people. So we need to have some benchmark and every public health department needs to have benchmarks on what is the rate of testing per lakh or per million, what is the test positivity rate. Swaminathan added that without adequate testing, combating the coronavirus is like “fighting fire blindfolded”. She said that the number of tests being conducted is not sufficient if the positivity rate is above 5%.
She said there were eight to 10 indicators that the governments around the world need to focus on, to assess whether facilities for coronavirus patients need to be ramped up. Governments need to constantly monitor the availability of beds, quarantine facilities, Intensive Care Units and oxygen supplies in district hospitals, she added.

In the documents filed with Delhi HC in “RAKESH MALHOTRA Vs. GOVERNMENT OF NATIONAL CAPITAL TERRITORY OF INDIA” about the testing breakup data health department data tells that out of the 2,81,555 rapid antigen tests conducted from June 18 to July 15, 19,480 returned positive results - a positivity rate of 6.92%. However, follow-up RT-PCR tests for those who tested negative were conducted only on 1,365 persons of which 243 tested positive. The positivity rate for the repeat RT-PCR tests is thus 17.8%. 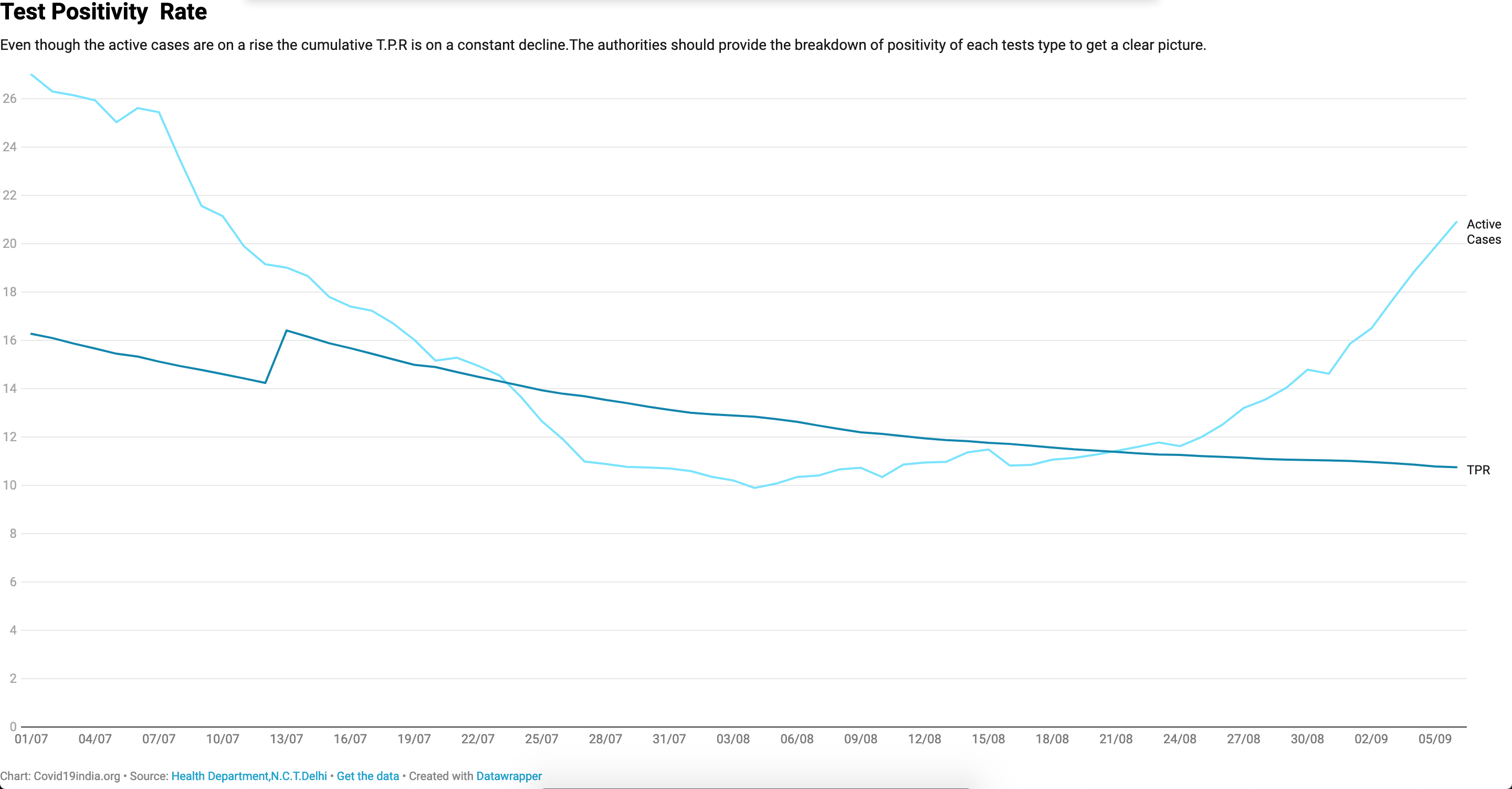 Review of infrastructure
Now coming to bed occupancy in line with the active cases, it is a given that with increasing cases overall bed occupancy and home isolation will increase. What is interesting to see is hospitalisation as a % of active cases. This is also an indication of the severe cases coming up (under assumption that only severe cases are hospitalised). 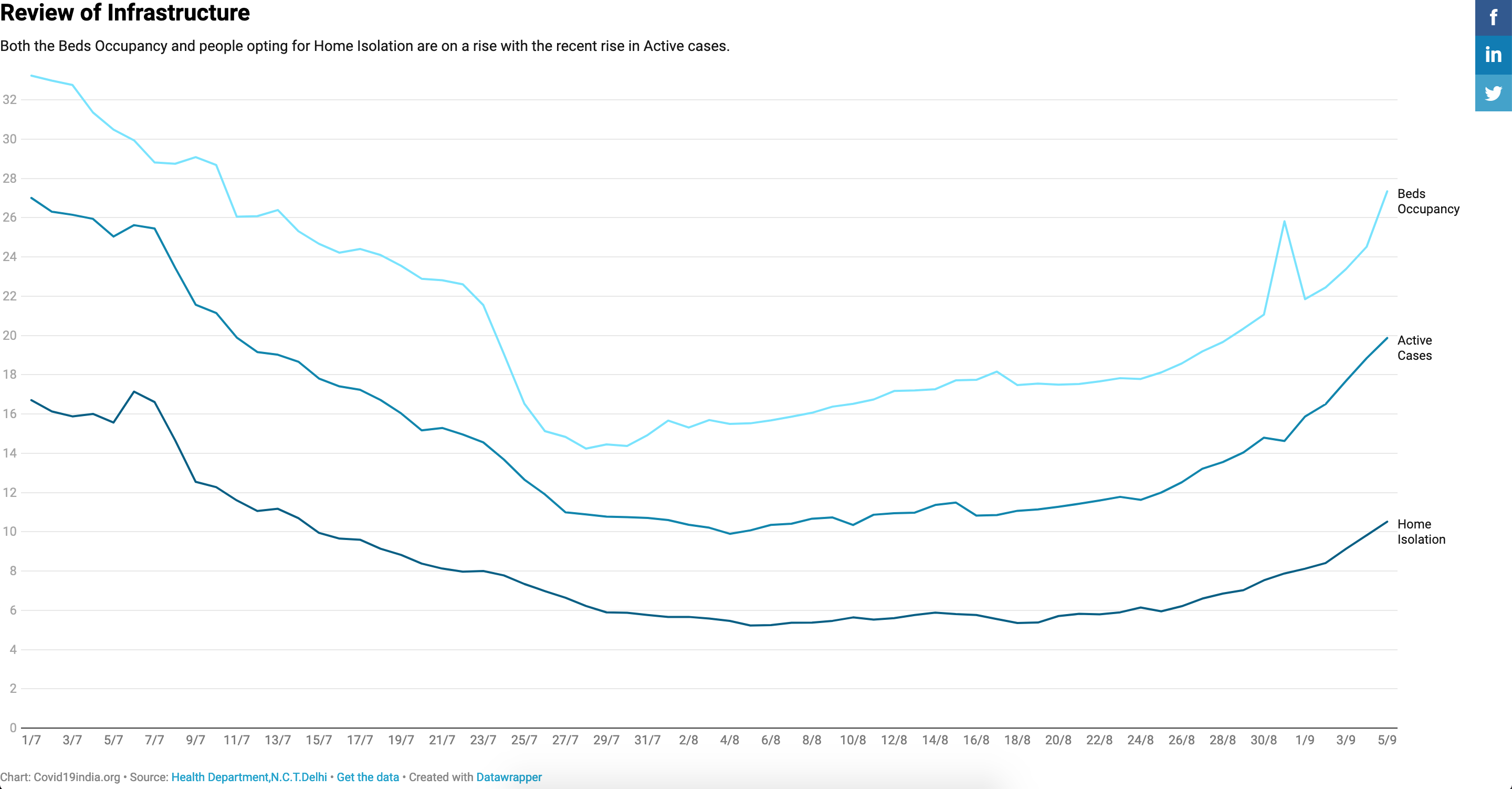 But when we have a detailed look at the occupancy a different picture stems out as there has been a much greater occupancy of beds in Dedicated COVID Health Centres. 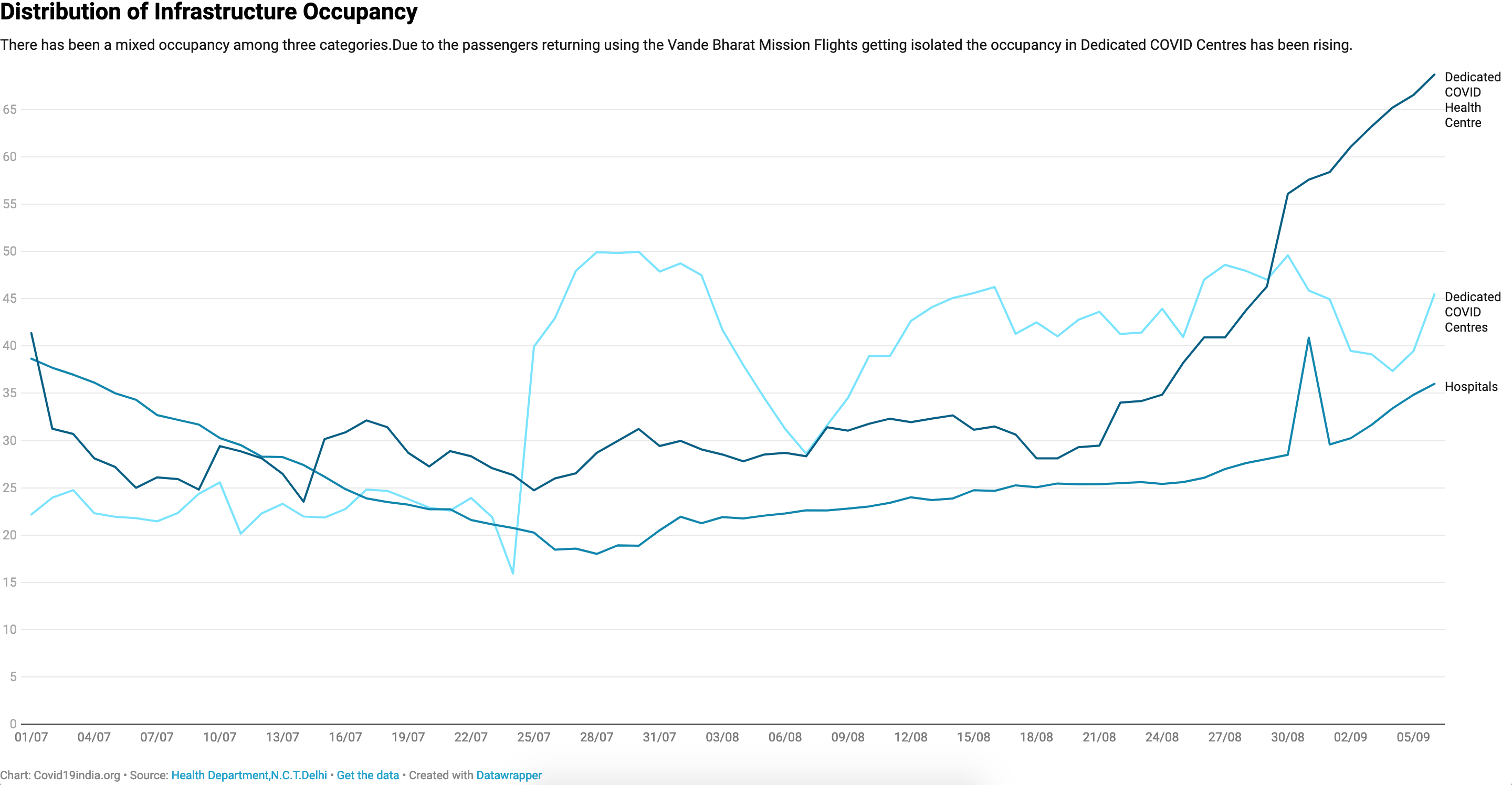 A look at the number of passengers who came via Vande Bharat Mission. 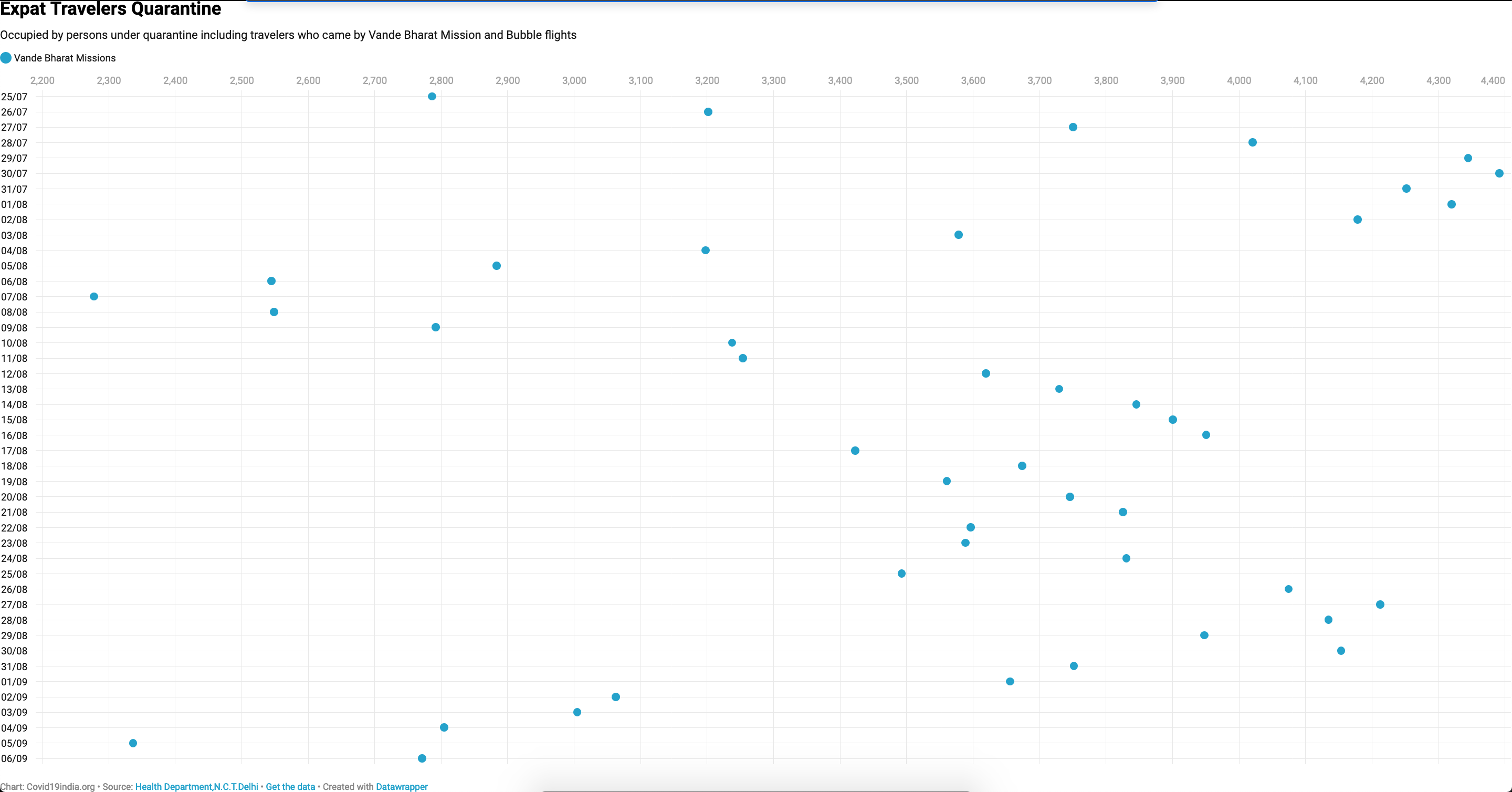 Testing numbers breakup
Now coming to testing breakup. RAT has been on a clear high and even total RAT conducted overtook RT-PCR conducted on 12/08/2020. According to the ICMR protocol, if RAT gives negative result and an individual has symptoms of ILI (influenza like illness), then he/she should undergo RT-PCR test. 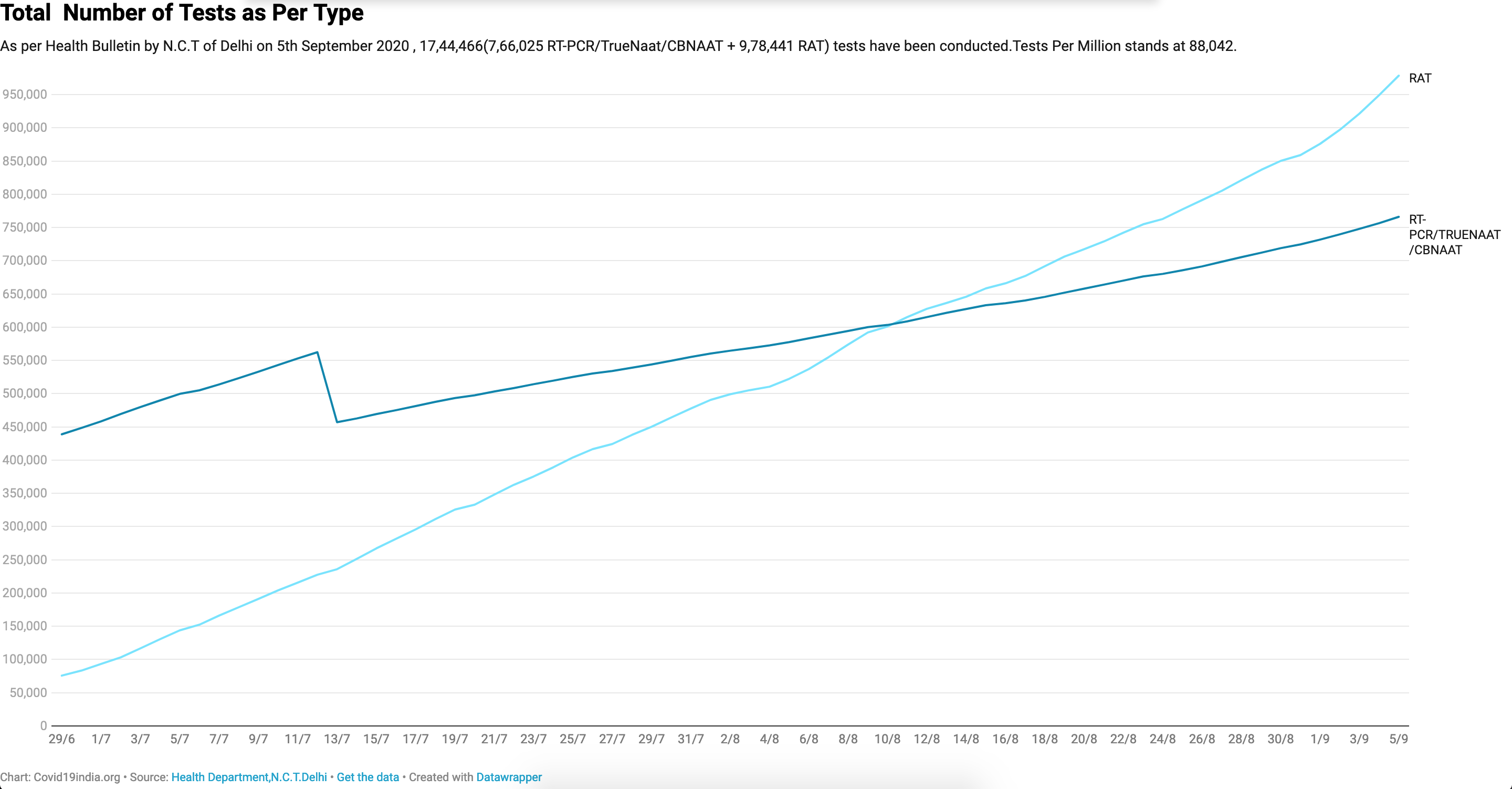 Explaining how a government should increase testing with RAT and at the same time ensure it doesn’t miss COVID-19 positive patients, global health expert Anant Bhan suggests a balance between RAT and RT-PCR test. He added,

If antigen tests are being used it needs to be backed by RT-PCR test and only then can we say that yes there has been a decrease in coronavirus cases in that particular area. If the numbers of both the tests are not matching then it is a serious issue and it may reflect a bad picture.”

Mr Bhan recommends all states to ramp up testing by not only increasing the number of rapid antigen tests, but also backing it by RT-PCR tests. 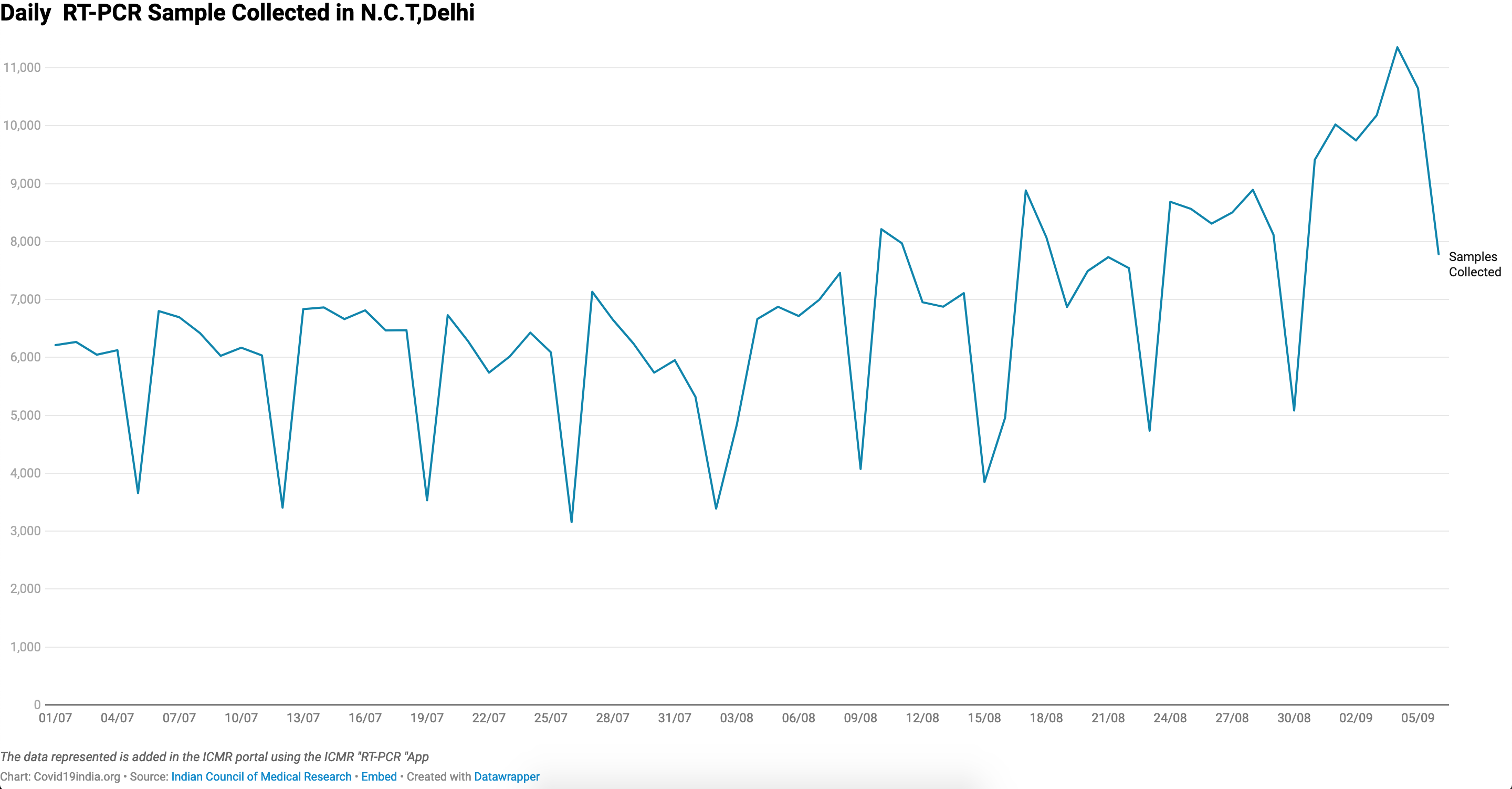 The court also pointed out that the Delhi government was conducting only 6,000 RT-PCR tests daily when it had the capacity to carry out 11,000 such tests. The Indian Council of Medical Research recommends the RT-PCR test and never says that it can be replaced with the rapid antigen test, said Nivedita Gupta of the medical research body. 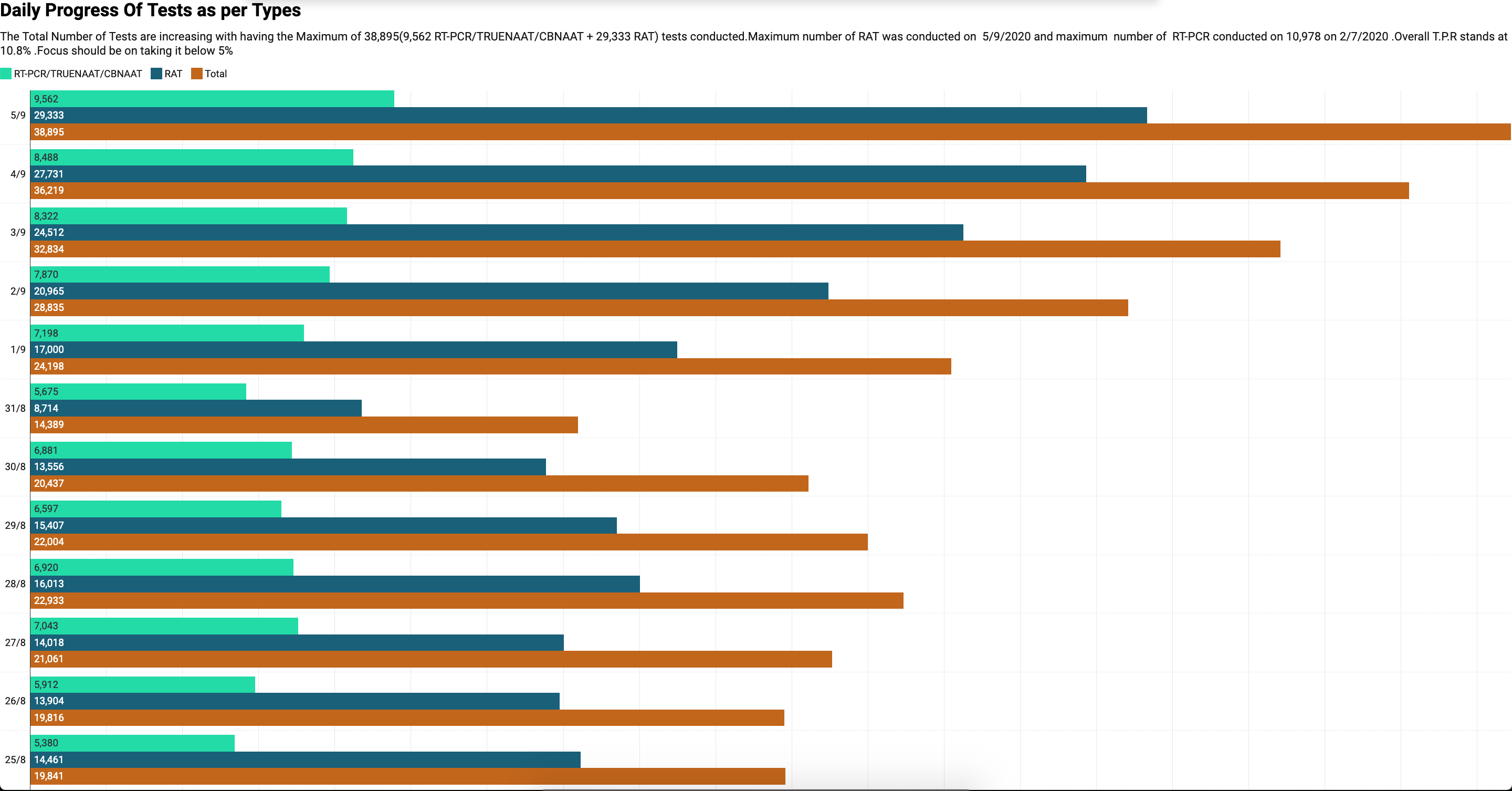 Serological surveys
As per Indian Express, serological surveys are an exercise aimed at detecting the true exposure of a population to a disease. They involve testing blood samples for antibodies and thus help detect even those people who may have recovered from the disease on their own without requiring medical assistance. In the case of Covid-19, this would include asymptomatic patients who unknowingly contracted and recovered from the disease.

Responding to the results of the first Sero Survey, the Ministry of Health and Family Welfare said:

Nearly six months into the epidemic, only 23.48% of the people are affected in Delhi, which has several pockets of dense population. This can be attributed to the proactive efforts taken by the Government to prevent the spread of infection including prompt lockdown,effective containment and surveillance measures, including contact tracing and tracking, as well as citizen’s compliance to COVID Appropriate Behaviours.

The sero survey report after calculating total seroprevalence along with sensitivity levels shows 28.35 per cent of prevalence in the national capital. He added that 32.2 percent of women in the capital showed seroprevalence as compared to just 28.3 per cent among men. Calling women the “stronger gender”, Jain said higher seroprevalence in women shows many of them didn’t even realise they fell ill, and recovered without intervention … It is good that nearly 29 per cent people have recovered and developed antibodies, which is higher than the 23 per cent in the first survey, but herd immunity is reached somewhere between 40-70 per cent.

Conducted between 1 August and 7 August, the second serological survey covered 11 districts across Delhi and collected 15,000 samples.
The minister clarified that this does not mean Delhi has reached herd immunity.

Another interesting thing to look at are the symptoms that people are showing after treatment of Covid-19. As per The Print, in order to cope with post covid symptoms the govt has established a “Post Covid Clinic”. The aim, Dr Ajit Jain said, is to build a repository of data that will give doctors and researchers a clue about what causes ‘long Covid’, and whether treatment during active infections can prevent long-term illness. An analysis on the British Medical Journal said approximately 10 percent of recovered Covid-19 patients are afflicted by long-term illness (three weeks or more).

This data can help in the long run to establish protocols and help in coping up with the future.

All this data can be accessed here.

« A detailed technical description of the site! The Fatigue »